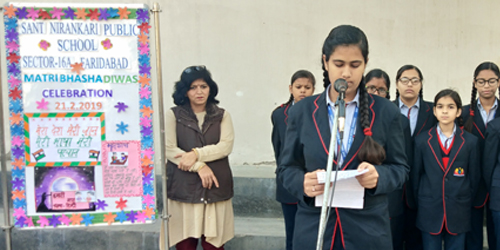 “The world is a melting pot of cultural diversity today”

There is a multitude of languages across the globe and there is also an urgent need to promote awareness on linguistic and cultural diversity and this is why UNESCO has decided to celebrate 21st February every year as International Mother Language Day.

Sant Nirankari Public School Faridabad, celebrated MATRI BHASHA DIWAS on 21.02.2019 to commemorate the International Mother Language Day. The event was celebrated in the presence of students. The aim of the celebration was to impart feelings of national togetherness and oneness in the nation. As a part of the celebration various competitions were conducted.

In the morning assembly students were sensitized about the linguistic variations of our country through Elocution quoting, “Languages are the most powerful way to preserve and develop culture and to promote it all across the world”. In order to encourage the students to learn more languages other than their own mother tongue.

Poems were recited by students in English and Hindi. A mesmerising performance was given by group of students through song about the cultural diversity of India and its unity.

Painting Competition was organised on the linguistic and cultural diversity of India for classes V to VIII. Its main aim was to make the students understand the value of linguistic variations and draw their attention to the diversity of cultures in India.

Essay writing competition was also held for the students of classes VI to VIII in English and Hindi in order to encourage usage, not only of the respective mother tongue, but the other Indian languages as well. The students wrote beautiful essays about cultural diversity throughout the world as well as linguistic variation in communication. Thus the aim to inspire students about the solidarity based on understanding, tolerance and dialogue is fulfilled.

Overall it was an eventful day which started on a good note and ended too with the positive mind set of respecting the cultural diversity and multilingualism.